The intuitive act of reciprocal artistic response creates a unique performance experience for both performers and audience. Expressing in the moment, an immediacy in the communication between performers and audience challenges, expands and also questions perceptions of artistic expression. The exhilaration of the unknown as well as the opportunity to meld artistic forms through reciprocal interpretations is what fuels our energy and inspiration.

In the Fall of 2002, Werner Friesen (Werner Works Art Studio) and I presented our first music and art event in Rosedale, British Columbia (Canada). We presented the paintings, the music in recital, and explanations on how the lines of creative process often overlap and also provide multiplicities of understanding, appreciation and exploration of art forms. Since then, our interdisciplinary work as a duo in RESPONS2 has become a junction of multiple artistic processes - some prior to performance and others through real-time performance. The intuitive act of responding to music in real time is a unique performance event. In contrast to viewing a completed painting on a gallery wall, there is heightened immediacy between the musician, artist and audience member, allowing the audience to view the unfolding of a painting. Projected on the screen, the painting process connects the sound world of the composer/performer to the listener's aural experience, and invites the listener to enter into a visual perspective of an aural event.

Prior to this, in 2008, I had joined the eXperimental improv Music Ensemble at the University of Alberta, Music Department, with composers Scott Smallwood and Mark Hannesson. Werner joined the group in Fall 2009 and we continued to explore and entertain the blending of creative processes across the arts, in particular with dance and the Jen Mesch Dance Conspiracy. We also had opportunities with XiME to do an improvisation session via streaming technology with TinTin in New York and improvisations in locations throughout the city of Edmonton. 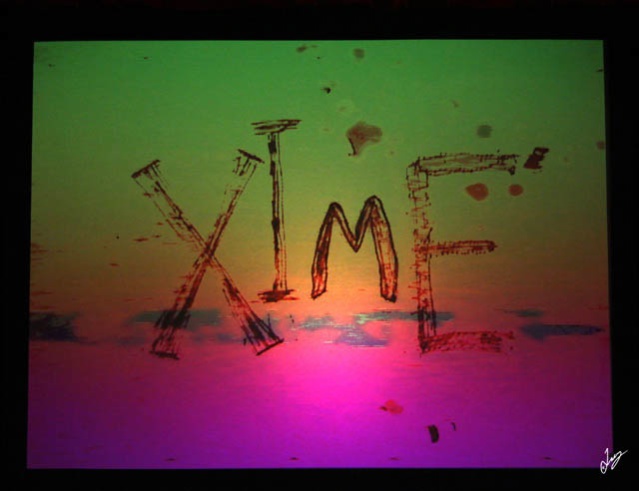 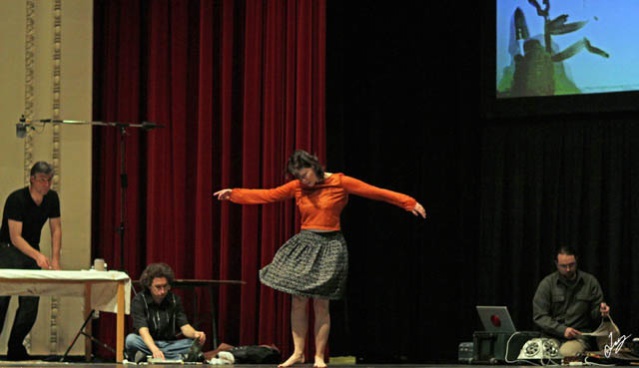 Through 2011 to 2013, Werner and I were working to bring together different perspectives of artistic interpretation. We explored interdisciplinary compositions from the 1960s, such as Trigon by the late Canadian composer Udo Kasemets (1919-2014), and performed it at the Winspear Centre in Edmonton, AB for the "Leaders of Tomorrow" concert. Trigon is a complex work that originates through compositional ideas using the I Ching. The score combines charts, symbols and rules for performance, engaging the musician as co-creator.

In 2014, RESPONS2 began encouraging liberal arts students, faculty and community members to join in on interdisciplinary collaborations and free-improvisation at St. Olaf College, together with the composers group Musika Nova. 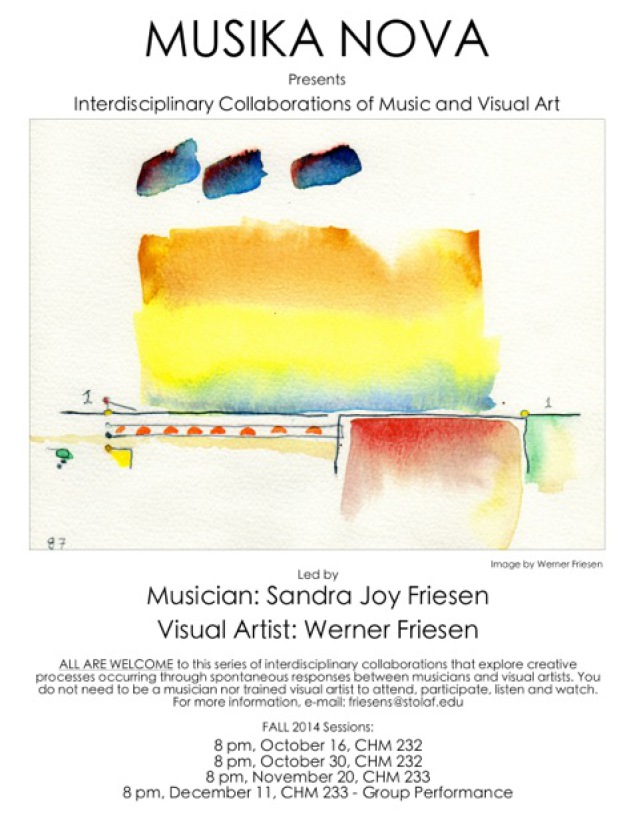 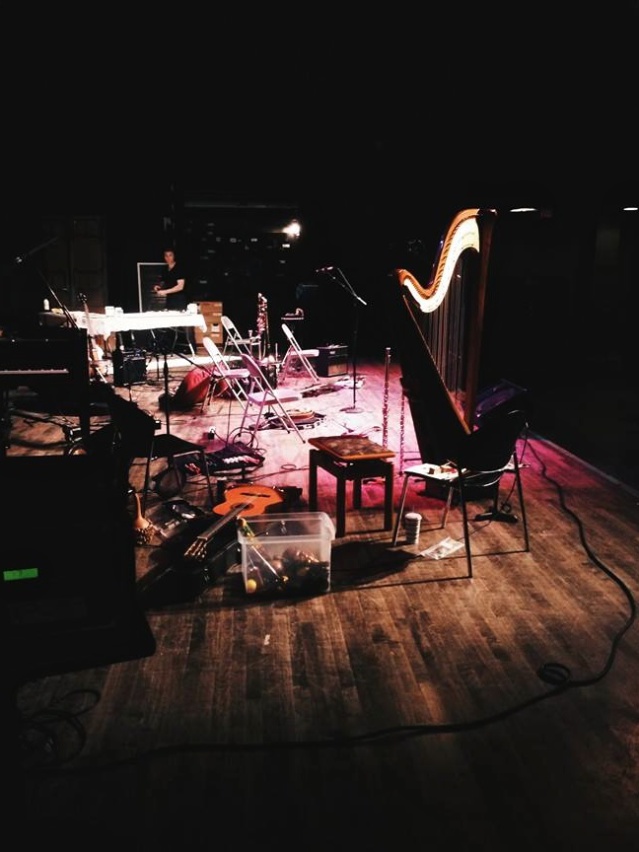 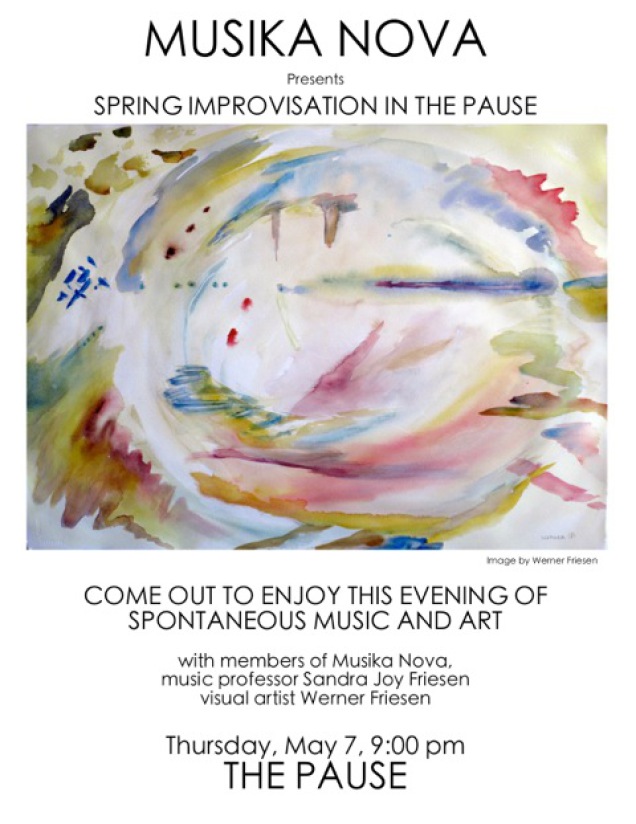 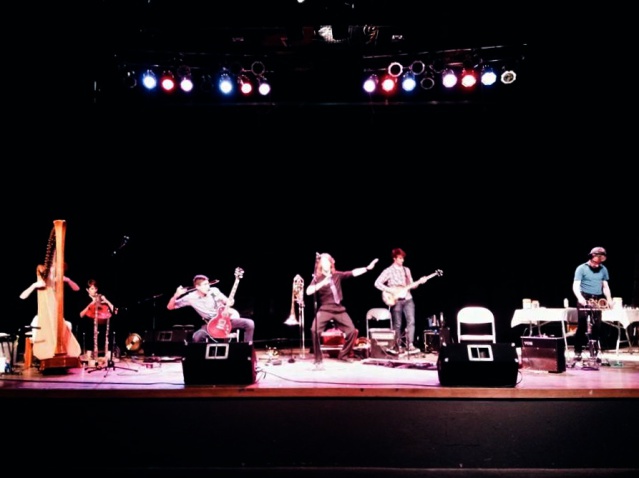 Having returned to Alberta, RESPONS2 continues its interdisciplinary practice.  For the SubArctic Improv and Experimental Arts Series (co-curated by Allison Balcetis and Jen Mesch) in January 2017 (Edmonton, AB), RESPONS2 collaborated with literary artist Steve Pirot as he improvised on the reading of "the four elements" by poet Robert Martens, and were joined by dancers Nicole Schafenachker and Bridget Jessome.

"Sandra Joy Friesen is one of Canada's best and most adventurous pianists. We're thrilled to host her in SubArctic on Mile Zero's old upright. Jan 26." Jen Mesch

Stemming from a deep connection to the land, the direction in painting for WERNER FRIESEN has traveled through various forms of expression, beginning with an interest in the human figure and its profound relationship to landscape. Internalizing the landscape, he explored relationships existing between the temporal and transcendental realms, and between the physical and spiritual realms. His style became abstracted while remaining symbolic, what he refers to as abstract symbolism. He paints imaginative realities, leaving behind the ornamental, and makes the image wrap the viewer into its visual world. Rather than observations or rendering of specific places, his paintings are about the inter-connectedness of physical environment, strength and beauty through multi-layering of vibrant, pulsating colours and free movements of brushstrokes. Through the full colour spectrum and bringing colour relationships to a maximum pitch, his works achieve a transcendental effect, and have now become fully abstract. Werner began spontaneous visual interpretations of music performance in 2009 at the Trinity Laban Conservatoire of Music and Dance (Greenwich, England UK). He continued this activity at the University of Alberta as a member of the eXperimental improv music Ensemble and in collaboration with pianist Sandra Joy in Edmonton, Toronto, Darmstadt (Germany) and Northfield (Minnesota). These sound-response paintings interpret the aural spectrum of music and sound through a visual spectrum of colour, gesture and form. In this painting performance environment a combined auditory and visual experience opens up the dialogue pertaining to the process and meaning of interdisciplinary collaboration, and the pursuit of transcendental abstraction.

Werner has developed substantial artistic diversity and is comfortable working in many mediums: acrylic, oil, watercolour, ink, and pastels. A graduate of the University of British Columbia, studying with Canadian artists Ken Lum, Jeff Wall and Robert Young, he earned the IODE Fine Arts foundation Scholarship for outstanding achievement. Werner has participated in group and juried exhibitions in Vancouver BC, solo shows throughout the Lower Mainland of BC, has displayed  work in England and France, and is featured in Derutiana, a catalogue of international artists published by Fonèma Edizioni (2010). During his degree studies and for several years afterward, Werner received significant mentorship from the Belgian-born painter, Hugo Myny.

Werner has taught art classes and private lessons, given artist talks at galleries and conferences, managed art gallery projects and volunteered in numerous community groups. Werner believes that meaning in life is generated from personal history, and must be shared in order to participate in collective identity. What he offers is the unique sum of his experiences. As stated by the poet, painter, and arts critic Pino Binnano:

"Werner Friesen searches and obtains along the path of visual memory, sensory and emotional origin all that is internal to the image; his work is always a reflection of a specific passage from sensation to wise consciousness." 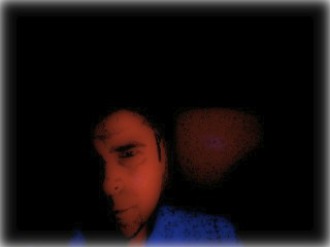